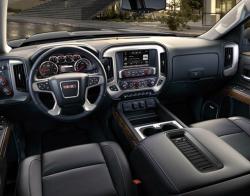 The lawsuit says there are at least two defective parts of the air conditioning system, the first being the line leading from the compressor to the condenser. This line consists primarily of an aluminum tube connected to a rubber hose, but the plaintiffs claim the tube can disconnect from the rubber hose and allow the refrigerant to leak.
Additionally, the aluminum tube is allegedly defective because it can rupture and allow the leak to occur.

GM informed technicians in an October 2014 Technical Service Bulletin (TSB) to replace damaged HVAC lines with a new design and to install brackets to hold those lines in place. The repairs were covered by GM’s warranty.

That same month one of the plaintiffs purchased his 2015 GMC Sierra. Because there wasn’t a recall, dealers were allowed to sell the truck without fixing the A/C.

By the time the A/C failed a couple years later, the plaintiff’s truck was out of warranty and the repairs cost over $1000 dollars.