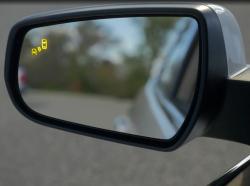 Have you heard about the lawsuit that says the side blind zone alert system in the 2013-2018 Chevy Cruze is defective? The lawsuit claims that the system fails because the sensors are poorly sealed and over-exposed to elements like debris and road spray.

GM has filed a motion to dismiss the case saying the plaintiffs are blind to the fact that of 250,000 Cruze vehicles with the Enhanced Safety Package, only 40 (0.016%) needed service during the warranty period according to the lawsuit.

The decision is pending.